This infographic taken from the German newspaper “Die Welt kompakt” did cause me some mental stress. It tries to explain who actually earns money with depressions – the pharmaceutical industry. Take a look at my quickly developed remedy.

In order to make it easier  for non-German readers I decided to change some of the headings. You can see a copy of the original in the German part of this article above: 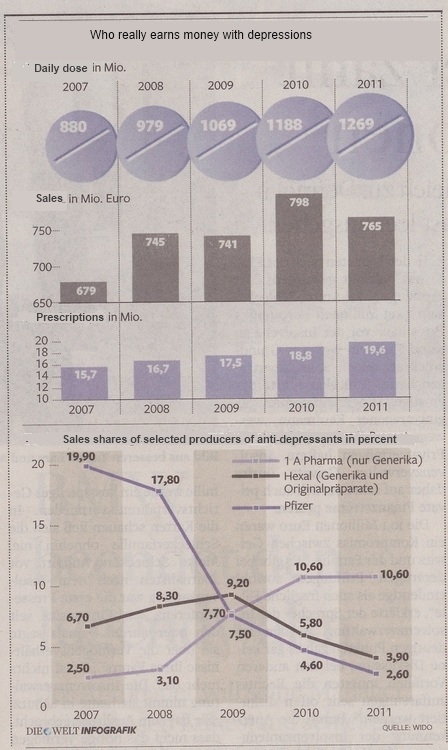 Bubbles, cut axes and a spaghetti diagram at the bottom: this infographic from the “Welt kompakt”  is not really easy to understand. I know I am a nitpicker, but this graphic will be seen by millions of people and I ask myself: Why do they have to deal with a second digit after the decimal place in the spaghetti diagram?

And as always: Let me give you counter-proposal based on our graphomate addon for SAP BusinessObjects Dashboards: 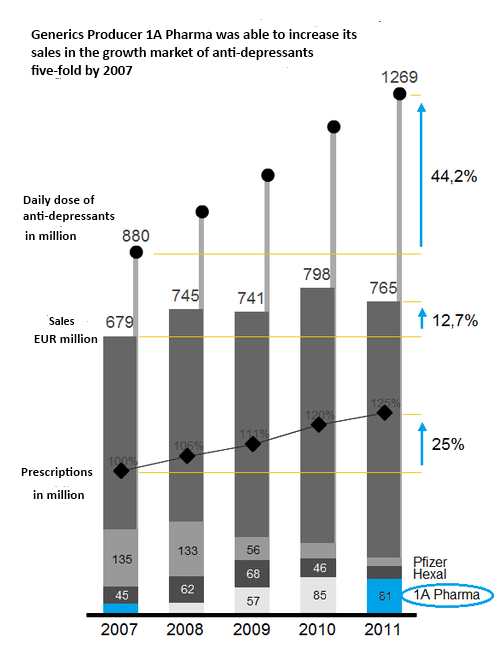 I needed some time until I realized the best way to show the development of prescriptions:as an index.To use bubbles in order to show development over time is particular unsuitable choice.

As always, I developed this diagramm according to the SUCCESS-Rules by Rolf Hichert – in this case I focused on the “Simplify-Rule.”  All  data is shown in one diagram and the recipient can see all relevant fact at a glance.
I made this diagram with our graphomate addon in SAP BusinessObjects Dashboards (Xelsius) – and in the near future I will make them with Design Stuio, too.

Considering this, I made another choice: I will continue reading the “Süddeutsche Zeitung”.