Right now, Tableau is the most exciting tool for Visual Analytics. I found a Tableau-Dashboard with a waterfall chart of facebook financials data since 2007 on DataRemixed. A perfect opportunity for a comparison with SAP BO Dashboards (Xcelsius) powered by graphomate.

One example of Tableau-Public, which came fluttering to me via Twitter, attracted my attention: Ben Jones has visualized facebooks revenue and net profits since 2007 with an interactive dashboard on his Blog DataRemixed: 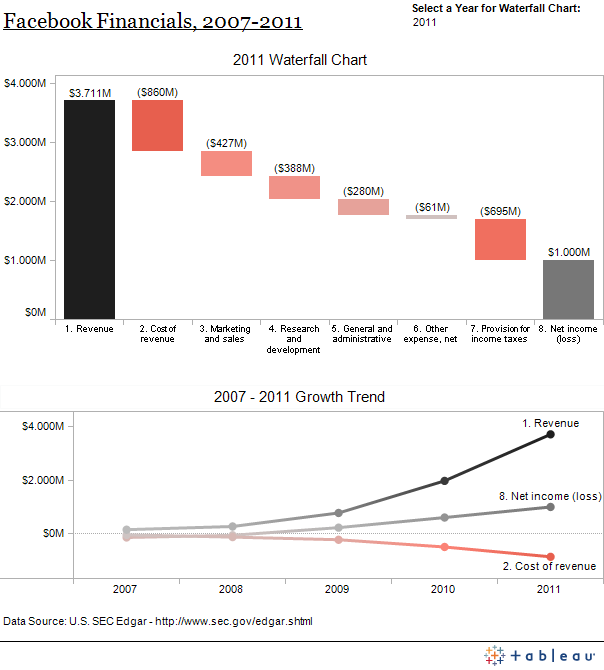 A beautiful interactive Dashboard which works in every browser! Using the sliders or the line charts beneath the Waterfall, the year to be presented can be selected and, according to the selected facebook financial data, the waterfall changes.
Kudos: technologically up-to-date. It seems that it is not easy to realize a waterfall dashboard in Tableau but this is common for many BI-tools. SAP BO Dashboards has only just conceded waterfall charts with the Feature Pack 3 – more rough than ready.

Remarkable is that the value axes in both charts starts with Zero and is not, for a change, cutoff. A rather seldom picture in the BI-Tool landscape: Most BI-Tools scale in a wild fashion and simply cut the value axes.

Unfortunately, from a professional point of view I have one major and three minor points ofcriticism:

Interesting: The drawline for the costs points in the negative quadrant. For the gentle observer the following question arises: are costs negative? Good question which I will go further into in one of my next blog posts.

It is easier to criticize than to make it better – nevertheless I tried it with SAP BO Dashboards (Xcelsius) and our graphomate Add-On.

For all of those who cannot see the following interactive Flash-Film – hello dear iPad-user! – here is the interactive Dashboard in full scale and here a picture:

How do I do it differently?

The purpose of dashboards is the fast und correct communication of information in order to show coherences and patterns. Automatic scaling of diagrams which use all the space available prevent this! Therefore, please attend to the CHECK-rule of the SUCCESS-concept by Rolf Hichert. This is one of the most important challenge in Dashboard-Design.

Thanks to Björn Rick who has supported me in a great way with the design and the realization of the graphomate-Dashboard.

UPDATE 10.04.2012: Robert Mundigl, the man behind the blog clearly and simply and a highly recommended tableau expert wrote a reply to this post: a must read – in english!

Alright, the year comes to an end and everybody eases up. One last post of mine…

It is hot, real hot, so the bikini once more enjoys great popularity. A good…

Visualization: My breakfast in Spain